Review: Fear You by B.B. Reid 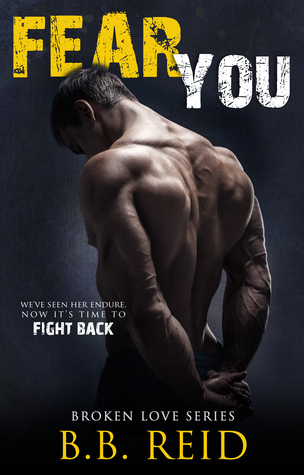 What happens when she’s had enough?

Lake Monroe has given in to her childhood tormentor too many times. She knows it, he knows it, and even their enemies know it. When he returned after being found guilty of a crime he didn’t commit—a crime he thought she set him up for, he returned darker than ever, demanding her body and her submission. To survive him, she knew she had to give in to fear once more or suffer the deadly consequences…

But Lake experienced what it was like to submit to the dark and demanding boy who invaded her dreams. Now she’ll experience what it’s like to fight him.

What happens when he wants more?

But after Keiran had conquered her body and tasted her submission, he found a new addiction instead—one he has no intention of giving up.

As secrets unfold,
Identities are revealed,
Danger closes in,
And they both discover what it really means to fear…

These books are crazy af. One of the main reasons I read is to escape everyday life. This book provided that escape. These characters are unbelievable at times. I know it was hard for some to wrap their minds around the fact that the MCs were in high school, but it worked for me. It made the story that much crazier. Keiran is sexy as hell. Damn, that man child… I love how Lake stood up for herself in this installment. I can’t wait to continue.

Natasha is right. This book is absolutely an escape from reality. I was really shaking my head at some of the situations these kids found themselves in. Typically, when reading stories about high school kids, I’m left wondering where there parents are, but BB definitely didn’t leave that question unanswered. Keiran is sexy definitely, but also majorly damaged. I loved that Lake stood up for herself and pushed to learn more about Kieran and his history and motivation. Definitely an entertaining read, and I absolutely can’t wait to read Keenan’s story because I need to know what’s going on in his head!