Let Me Hold You by: Alexandria House 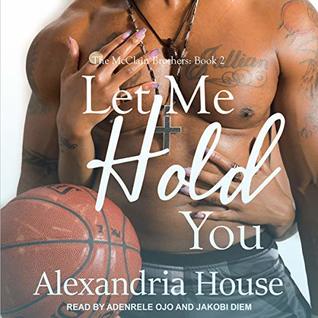 I am addicted to these McClain men! Book 2 of the series gives us the youngest McClain brother, Leland. Leland is a NBA player whose love for older women is a constant source of laughter for his family. He took it in stride, but it made for some hilarious banter. Leland didn’t care what his family thought about his choices in women and went on to pursue a relationship with Kim.

Kim and Leland were mutually attracted to each other. But, something was holding her back. I couldn’t imagine Kim allowing something to hold her back from scrumptious ass Leland and when it was revealed I was shocked! I did not see that coming. So I gave Kim a pass, but her reasoning became irrational. I started to see her as immature and irritating. At one point I wanted Leland far, far, away from Kim because damn, but I was so wrong. Kim had been through and was still going through some unimaginable ish. I couldn’t even begin to wrap my head around her problem, but she didn’t need me to, because she had Leland! Leland and his beard. Leland was taking no ish off of Kim or anyone else. He forced her to be honest with him and herself. Again, Leland was scrumptious. Leland and Kim had a ton of obstacles to overcome. Leland was able to guide them through with a steady hand and unwavering devotion that melted my heart.

The writing was witty, hilarious and fresh.  All I have to say is I died laughing at this book! OMG! Leland and lil’ Kim…dead! I listened to this book via audible. I enjoy these narrators too much. The way they perform a story is beyond. It’s as  if I’m listening to a movie or play. Its so entertaining. The sad thing about these narrators is that they have ruined audio books for me. I’ve tried to get into other books but they sound so meh after listening to Jakobi Diem and Adenrele Ojo. I don’t know what I’m going to do now.

NBA player, Leland McClain, the baby of the McClain family, is tall, handsome, talented…and spoiled. He’s a man who gets what he wants, and what he wants is the lovely Kimberly Hampton.

Kim Hampton is the director of a community center, a woman who lives to help others while trying to forget a troubling past. As far as she’s concerned, a relationship with any man is a horrible idea. But a relationship with Leland McClain? That’s just out of the question.

He has to have her.

She is undeniably attracted to him.

But will she lower her guard and let him hold her?

*****Note: This is a love story involving an older woman and a younger man which contains profanity and sexual content. If you do not like these elements in your romantic reads, this is not the book for you.*****