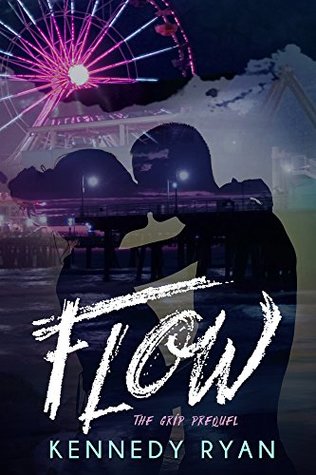 Blurb: In 8 years, Marlon James will be one of the brightest rising stars in the music industry.
Bristol Gray will be his tough, no-nonsense manager.
But when they first meet, she’s a college student finding her way in the world, and he’s an artist determined to make his way in it.
From completely different worlds, all the things that should separate them only draw them closer.
It’s a beautiful beginning, but where will the story end?

We met Kennedy Ryan at COPA in New York and were so excited to dive into this book. Flow was a novella and was very short, but I feel like I really got to know Grip. He has so much depth in his personality, and I feel like I really got insight into who he is in a short amount of time. And I LOVE HIM. He’s intelligent and sexy. He’s complex, but straight forward at the same time. He’s experienced hardship, but it hasn’t made him jaded. He is such an amazing character and I need more of him. Bristol was a character with many different levels as well. Her driving force is her love for and belief in her brother. She believes in him so much that she is willing to bet her entire life on him. Her connection to Grip was as immediate as mine. Their connection was real and deeper than physical, although the physical attraction was there as well. There were a few hot moments, that were especially hot because they were stolen. We hardly ever get a chance to see a black book boy, so I must admit (sorry Kennedy) that I was a little skeptical that he wouldn’t be believable. Grip was everything that I love in a book boy and some. His voice was authentic and not at all trite or overdone. This was my first Kennedy Ryan read and I cannot wait to jump into the next one! I’m hooked!!

Damn it Jasmine!!!!!!! I have no idea what to say now (little cousins are the worst). Since Jasmine took all of my thoughts, I’ll make this short and sweet. I honestly didn’t know what to expect when I started this book. I started off slow. But @ 30% in, I spoke the words “thank you” and they were aimed at Kennedy Ryan for her authentic characters and the truths they told.  I appreciated Grip’s approachable personality. He jumped off the pages right into my heart. I can’t wait to see where this story is going. I have a feeling its going to be angsty…*sigh* BRING IT ON!!!!!!!!!!!!