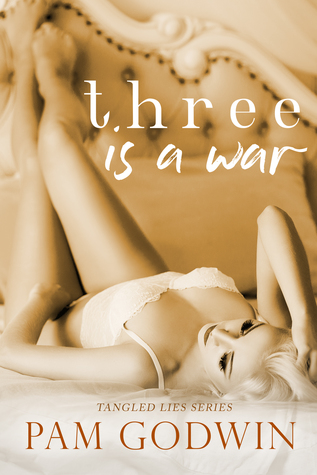 Three means war.
Three sides vying for forever.
Cole.
My first love.
The bad boy with the dangerous smile and passionate temper draws attention like a lit fuse on dynamite. But his dark molten eyes spark only for me.
Trace.
My second chance.
Over six feet of Norse god in a tailored suit, he calculates every move and seizes my hungry breaths with an iron fist.
Me.
The free-spirited dancer, torn between two men with no resolution in sight.
I tried leaving, staying, refusing, and surrendering.
What options do I have left?
I love two men, and I do the only thing I can. I fight.
The TANGLED LIES series must be read in order.
One is a Promise
Two is a Lie
Three is a War

**ARC provided by author in exchange for an honest review**

Its freaking over, and I’m a mess. No matter who Danni chose my heart would still be broken. This was a hell of a journey and I had a ton of emotions while on it. I wouldn’t wish Danni’s plight on my worst enemy (because it wouldn’t be fair for her to be loved by 2 sexy alphas) lol. I had no idea where this journey would end. I was all over the place. Keep Cole. Keep Trace. No don’t leave him!!  At one point , I was even wishing that Cole and Trace just forget about Danni and salvage their beautiful friendship. This book showed us much more of Trace and Cole’s shared history. And I loved every minute of it. Cole and Trace’s bond was beautiful but heartbreaking at times. Their love for one another caused me a few crying spells. I really appreciate a story with multiple meaningful relationship arcs. I was so terrified that Ms. Godwin was going to make Danni’s choice easy by killing one of the heroes. She didn’t and Danni was as brave as EVA.  My girl crush on Danni is officially intact. I just love her. She was such an authentic character, and I wanted her to be happy. I love Trace. I love Cole. So, I emailed Ms. Godwin begging for a hea for the man who lost. I need him happy. *sigh* This series has made its way on my favorites list. The highlight of our summer reading!!!!!!!!!

The highlight of our summer reading is an understatement! Each of these books pulled us out of our summer slump. This story was our one constant this summer. We were both so worried that one of them would die. We love Pam, and we trusted her to do the right thing and make Danni decide. Pam definitely delivered!! We broke all of our rules to read this series. We typically don’t read unfinished series, and we don’t read love triangles. Thank Pam for making it worth breaking the rules! Now unlike Natasha, I was happy about the ending. Ultimately, there was no choice. Danni followed her heart and was rewarded. I loved Cole, he was definitely sweet and totally alpha at the same time. But there was something about breaking that icy shell of Trace that spoke to me. I don’t envy Dani’s position. She was basically choosing between fire and ice. I would love a novella to give the “loser” his hea just because I want more if these characters. This is definitely a must read series. Thank you Pam for doing the hard work, not taking the easy way out by killing off a character and effectively saving our summer.
5 stars