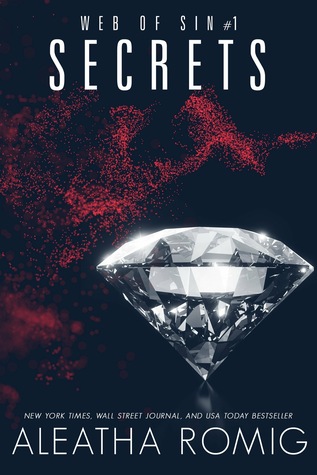 The twisted and intriguing storytelling that you loved in Consequences and Infidelity is coming back at you with an all-new alpha anti-hero in the dark romance series Web of Sin, by New York Times bestselling author Aleatha Romig.

I’m Sterling Sparrow. You’ve no doubt heard my name or read it on the top of tall buildings. There’s more to my business—my realm—than what is seen aboveground.

Within the underbelly of one of America’s largest cities lives a world where a man’s word is either his most valuable tool or his most respected weapon. When my father ruled that world and that city, he promised me someone who would one day make my reign complete.

Since that day, long ago, Araneae McCrie has been mine.

My father is now gone.

The city and the underbelly are now mine.

The time has come for me to collect who was promised to me, to shred her life of secrets and make her who she’s always been—mine.

*Secrets is book one of the Web of Sin trilogy.

This was one of my most anticipated reads this year and it did not disappoint. Aleatha’s twitter feed had me dying to meet Sterling. No way could Sterling make me forget my Nox.  Sterling was everything you’d expect an anti-hero to be. He was the epitome of an *sshole, he was sexy and all alpha. But the one thing that set him apart was his unwavering feelings for Araneae. Sterling was adamant about most things, but his feelings toward “his” woman were at the top of the list. We knew where he stood from the beginning. I know this might sound like a case of insta love, but it wasn’t.  Aleatha’s story telling allowed the reader to come to terms with Sterling’s feelings in a timely manner. It were as if the reader and Araneae were one in the same as we faced Sterling and his life altering demands. With every twist and turn Sterling threw her way Araneae’s spine of steal remained intact. Araneae was time enough for Sterling.

I really adored these characters. I need more of a connection from them though. I feel like so much is missing and I’m sure that was on purpose. I’m positive the evil genius (Aleatha) is somewhere doing an evil laugh. I know as the series goes on my questions will get answered. I also know I’m going to go through hell before I get them. I feel anxious just thinking about it. I will most likely start to hate these adored characters before ultimately loving them again. But you know what? It’ll be so worth it!