Shame Me Not by Fiona Cole 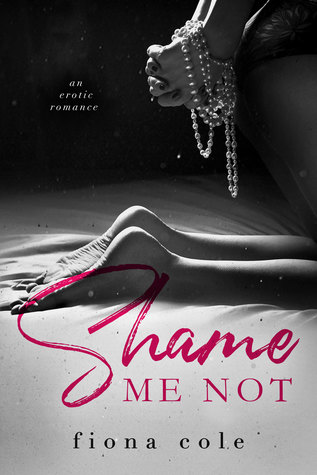 It’s official, I am obsessed with this author’s work. This. Book. I don’t know where to start. I don’t think I can write a coherent review, but I’ll try.  This was a friends to lovers story filled with enough angst to cause a panic attack. I hate friends to lovers but Fiona Cole’s spin was fresh and unconventional.  Kevin and Ana’s story captured all of my attention from the very beginning. Their journey starts when they meet at 16 and spans over 10 years. So much happened in this book. So many feels. So much angst.  Kevin and Ana’s friendship was like a living entity. They nourished it and it grew into an unbreakable bond that became their one constant. It was a beacon and I believed in it irrevocably. Yes, I wanted them to become a couple, but not at the cost of their friendship.  I think that’s where most of my angst stemmed from. I was terrified they would end up hating each other, especially when they added sex to the equation. The. Sex. Was steamy, edgy, kinky and just… beyond. This book was over 400 pages, and with books this big some authors add a lot of fluff. Not Fiona Cole!!! No word was wasted. Every emotion was an experience. This. Book! It delivered that high all book addicts crave.  Its the feeling you get when you close your book and realize you’re in the real world.  You’re sitting there speechless, content, and in awe of  what you just experienced. Then you crash because its over and you want to do it all over again. Yeah, that was this book.

Until I met her, I was alone with the dark desires that I didn’t understand, that I couldn’t reconcile.

She became my best friend, and then she became so much more.

I wouldn’t have survived until college without her. When we were together, I was at peace for the first time in my life.

But it was too good to last.

Our appetite for pain and pleasure destroyed us. And all the drinks in the world weren’t enough to get used to missing her.

On the verge of earning my degree, Ana walks back into my life, those gray-blue eyes still able to see right through me. It’s the chance I’ve been waiting for. One last chance to overcome my shame.

If only it were that easy.