Review: This is Love, Baby by K Webster 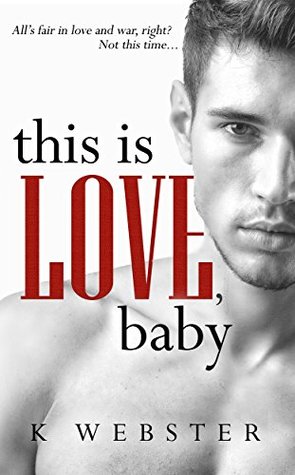 What? What?? Ugh, I am so invested in these characters. I LOVE War and how he was able to fight against his demons and put Baylee first. Baylee was just the type of strong heroine we love. She continued to fight for herself even when her situation seemed desolate. I was rooting for their love throughout the entire story. This book was a great continuation of the first story. There were points where I was so frustrated that I had to put the book down. I was on edge from page 1. This is definitely a must-read series.

I don’t know what Jasmine read, but it wasn’t what I read. I liked this story enough to see it through to the WTF ending. But I had some serious issues with this book. I’m surprised my Kindle survived. Baylee got on my nerves, and I didn’t see what had these men “up in arms” over her. She was 18 years old!!!!!!!!!!!!!!!!!!!!!!!!!! It was unrealistic to me. And wth happened to War, I understand he was fighting for Baylee but his character wasn’t the same at all. I love his crazy erratic self. I don’t know who he is anymore. The only thing I really gathered is that he loves Baylee. The villains were outrageous and unbelievable at times. Especially Gabe the super villain. Really?! I just wanted a HEA… I hope Baylee and War make it to the other side. The story was okay, but I think my expectations were too high.