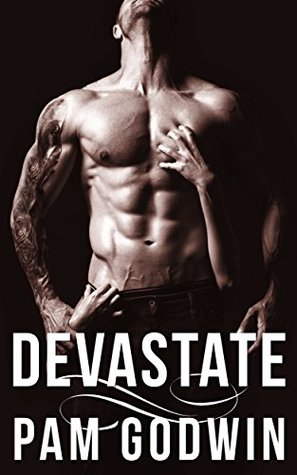 “What is the price you’re willing to pay?”
“Money isn’t an issue.”
“I’m not talking about money.”

Tate is on the hunt to find his best friend’s sister.
Eleven years ago, Lucia Dias was abducted. Presumed dead. He never met her, so why does he care?
Some might call his efforts noble, but his motivation is more perverse, bordering on obsession.
When he follows a chilling lead to Venezuela’s Kidnap Alley, what he finds is neither a corpse nor a captive.
Amid poisonous lies and crippling depravity, the price of love is devastation.
And he pays.
With his body, his blood, and her life.

DELIVER series (HEAs with no cliffhangers – must be read in order):
Deliver #1
Vanquish #2
Disclaim #3
Devastate #4

Yeah this book pretty much devastated me, then put me back together. This was my 1st 5 star read of 2018. It gave me everything I want in a book. Action, hot alpha, strong heroine, hot sex, darkness, angst and my tears. GAH!!!! This. Book. Tate was not prepared for what he found in Venezuela. Tate went to Venezuela to find Camila’s sister, but he found a love that he was willing to do anything for. And boy did he do anything!!!! I can’t even wrap my mind around some of the stuff that went down in this book. It was gritty and dark af just like I like it. The angst was never ending. I was on the edge of my seat until the last page.  I really don’t know what to say without giving too much away.  My feelings are all over the place, and I’m kind of speechless. I don’t know what characters gave me the most feels, but Tate and Van broke me. Van’s redemption is epic! Speechless… I can’t write a coherent review and I apologize for that. My 1st 5 star read of 2018 left me a blubbering idiot!