Review: NOLA’s Own by Kelli Jean 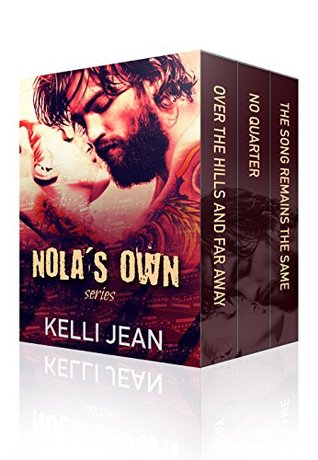 I wanted to read this book when it was first released, but I couldn’t stomach an unfinished series at the time. The cover and the fact that it was a rock star trope sold me immediately. Where do I start? There are mixed reviews with the first in the series. And I have to agree Phil was an immature *sshole, and yes, Kenna cried all the time, but who the hell cares?! By the time I realized these small nuisances, I was sucked in to a life that I couldn’t get enough of. I COULD NOT, WOULD NOT move on with my life until I finished this series. This series completely took over my life. And the funny thing about it was, there wasn’t a ton of drama going on. I just enjoyed spending all my time with Our boys. I loved hanging out with them at the music festivals, on the patio, touring, and everywhere else. Kenna, Alys, and Lili were hilarious. OMG every girl deserves friendship like that. I was so happy to be included in their circle. I felt like I was truly apart of their clique. Phil… *sigh* was everything I need my book boys to be alpha, sexy, sensitive and sexy. With the connection Kenna and Phil shared it was hard to grasp the fact that they didn’t really know each other. The three books took us on an extraordinary journey through their everyday lives, obstacles, insecurities, and unbreakable bond. Even though the 1st two books didn’t have a ton of drama, the 3rd definitely made up for it. All I can say is this series will definitely be on my re read list because I still can’t get enough of Phil, Kenna and our boys. I feel a deep depression coming on until #4 is released.  Too f*ckin right!!!!!!!!!!!!!

This was such a fun story to read. Each book picks up right where the last one left off. This was such a well written story and I truly had fun reading about these rock stars and their lives. Phil and Kenna’s love story was amazing. In the first two books, they experienced normal growing pains and came out stronger each time. In the 3rd book, the drama kicked up a notch. It was heart breaking at times, panty wetting at times, but authentic at all times. While Phil and Kenna were the definitive center of this story, the secondary characters were just as much fun and added so much depth to the story. It couldn’t put this book down because it was so much fun to read. Kenna, Alys and Lili were amazing friends who had so much fun. And the boys, crazy, fun boys. The worst part of this book was not being able to hear Phil’s voice. I NEED to hear this crazy, amazing voice that has the power to set panties and hearts aflame! Also, I have a thing for big book boys, and Phil is gigantic. Ugh, I just want more Phil basically. I cannot wait for #4!!