Review: Too Late by Colleen Hoover 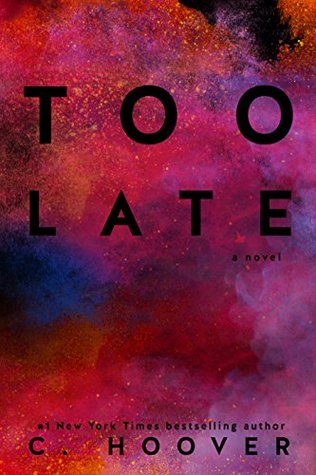 Sloan will go through hell and back for her little brother. And she does, every single night.
Forced to remain in a relationship with the dangerous and corrupt Asa Jackson, Sloan will do whatever it takes to make sure her brother has what he needs.
Nothing will get in her way.
Nothing except Carter.
Sloan is the only good thing to ever happen to Asa. He knows this and he never plans on letting her go; even if she doesn’t approve of his lifestyle. But despite Sloan’s disapproval, Asa knows what it takes to get what he wants. He knows what he needs to do to remain on top. Nothing will get in his way. Nothing except Carter.

I love when the more popular authors release books on Wattpad, because they always write something unexpected. This was dark for CoHo. I loved these characters and was sitting on the edge of my seat watching this story to unfold. I loved Sloan ad felt sorry for her plight at times. She was strong and resilient. Asa was certifiable. I just wanted him to die. I loved how this story was told from three POVs. This was a great read.

This book was a nail biting, page turner. There were moments when I had to put the book down because I didn’t want to see what was about to happen and moments when I wanted the book to hurry up and end because I was desperate for a resolution. I was INVESTED in these characters. I loved Sloan and was rooting for her to win. As much as I wanted to hate Asa completely, I had conflicted feelings about him. He was evil and at times an evil genius, but the was more depth than just a bad guy who took advantage of a sweet girl. There were moments when the book felt a little drawn out, but overall, it was an amazing story.