Review : The Black Sheep and the Rotten Apple by K.A. Merikan 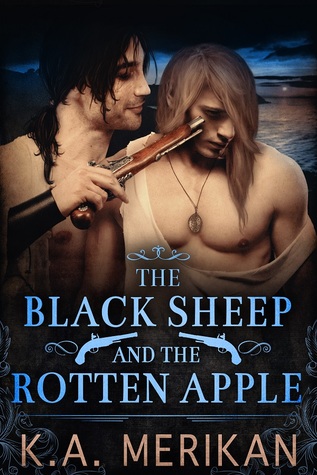 I am not the biggest fan of historical fiction, but when I found out K.A. was releasing this I was definitely intrigued. Because I’m not a fan of historical fiction, I think this took me a little longer to get into. I loved Evan and Julian from the beginning, but I found myself taking my time with this one. At about 35% I couldn’t put it down though. I loved this story of forbidden love.  It was action packed and had me on the edge of my seat. These boys brought out the best and worst in each other. It was so entertaining to watch their interactions and the crazy stunts they pulled.  Their love for each other knew no bounds, and they were determined to keep the happiness they had discovered in each other. Evan and Julian burned my Kindle up with their hawt scenes. In my mind I see Evan and Julian as the first M/M power couple. Evlian or Juvan , whichever name you like, Don’t F*ck With Them!!!!!!!! This is the first book I’ve completed in 2017 and I’m already drooling over not 1, but 2 new book boys. Lets go 2017!

K.A. delivers once again! Like Natasha, it took me some time to get into it, but once I did, it was nonstop action. While they had a rough start, the connection between Evan and Julian grew to be sweet and genuine, and once Julian finally opened up to who he really is, it got incredibly hot. There were laugh out loud moments that had me looking crazy at work and hot moments that had me needing a break. These 2 men managed to get themselves in some interesting scenarios and I was on pins and needles waiting to see where they ended up. Not to mention how gorgeous Evan was. He was a big, strong silent type and he was willing to do what it took to take care of his man! Starting the year off with a definite #level3! Come through K.A.!!